Parliamentarians Positive about the Online Voting Option in the Upcoming Elections 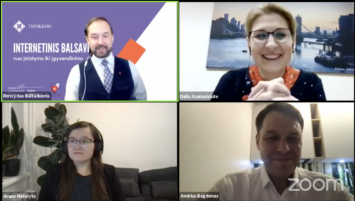 After more than 100 days since the newly elected Seimas started working, GLL Think&Do initiative LTiVote invited candidates from the global Lithuanian constituency to discuss the nuances of online voting. The panelists included parliamentarians elected in the Global Lithuanian Constituency Dalia Asanavičiūtė and Andrius Bagdonas, as well as the director of GovTech Lab Arūnė Urtė Matelytė. The discussion, moderated by Dr. Rimvydas Baltaduonis, touched upon the pitfalls that the adoption procedure for this law could experience, but the panelists provided an optimistic outlook on the integration and implementation of e-voting opportunity in the upcoming election.

Andrius Bagdonas expressed hope that the option of online voting will be provided in the upcoming municipal elections. While the new proposal on the law will not be discussed in the spring term, it will appear on the program in the fall of 2021. He highlighted, that one of the priorities of the parliament is to provide global Lithuanians with a way to vote conveniently, online. The Central Electoral Commission of Lithuania is expected to prioritize the question of online voting, and search for solutions facilitating the implementation.

The online voting option would positively affect the number of Global Lithuanians voting in both the general elections of 2024, as well as the upcoming referendum on dual citizenship. The ruling coalition agrees that it would increase the number of voters, as well as eliminate the difficulties voting by post creates and provide a more accurate view of how the global Lithuanian constituency is voting.

One of the pitfalls that online voting might be facing is issues with e-voting technology. Arūnė Urtė Matelytė pointed out that government should already start a dialogue with experts and search for the best solutions for the technology that will be used. She called online voting a challenge that would require in-depth discussions, tackling the issues of voter identification, voting security, and cyber-attacks. The head of GovTech Lab reassured, however, that the IT community is willing to advise and help the government with research.

The newly elected government has already taken steps towards making online voting a reality. Dalia Asanavičiūtė highlighted that the online voting issue is in the coalition agreement as well as the government program, which will lead to the question receiving actual political traction, rather than just rushed last-minute decisions. According to the parliamentarian, this proves that the political will, which was lacking in the previous governments, is visible in the one elected in 2020, and that this will could lead to some concrete laws adopted to the benefit of an online voting option.

“The Ball is in Seimas court,” – said D. Asanavičiūte – “The only question that is left now is when the legal regulations on online voting will be introduced, be it in time for the municipal elections or for the Global Lithuanian constituency during the General Election of 2024.”