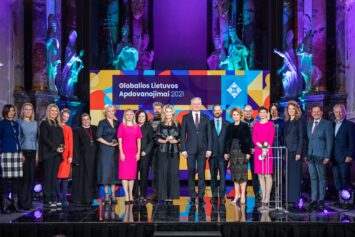 December 29, the laureates of the tenth Global Lithuanian Awards were announced and honored during a solemn ceremony that took place in St. Catherine’s church, Vilnius. Eight laureates – prominent representatives of the diaspora who created an independent Lithuania, as well as businessmen, public figures, and visionaries who are creating today’s thriving Lithuania – were awarded statuettes, created by sculptor Stasys Žirgulis.
Global Lithuanian Awards annually honor Lithuanians living abroad or returning from it, who create an advanced Lithuania with their exceptional talent, visions, and successful work and make the country’s name famous all over the world.
This year, a new category of awards was announced, dedicated to people who were not born in Lithuania and are not of Lithuanian nationality, but whose works contribute to the well-being of our country. In his speech, the President of the Republic of Lithuania Gitanas Nausėda also emphasized the need for and importance of such an award.
“Global Lithuanians are brave and active people from all over the world who have never forgotten their homeland, who honor the name of Lithuania, support the exchange of innovative ideas, promote scientific progress and promote the strength of Lithuanian-born business abroad, popularize our country and its people all over the world. The new category of awards “Global Friend of Lithuania”, which was created this year, deserves a special mention. I hope that it will draw the attention of all of us to those people who enrich our country with their works, even though they do not come from it,” said His Excellency.
Aušra Kukelkaitė, the CEO of GLL, pointed out that after talking about Lithuania entering the global arena, today we are talking more and more about the world that has come to Lithuania.
“So far, we have watched from the sidelines how Europe is tackling the challenges of migration, how it is dealing with same-sex partnerships, how systemic cases of human inequality are being raised. Such circumstances invite us to reconsider who we are, who Lithuania is, who Lithuanians are, what we want to be in the future,” – said the director.
Meet the laureates of Global Lithuanian Awards 2021 in the following categories:

READ MORE ABOUT THE LAUREATES HERE>>

Global Lithuanian Awards are organized under the patronage of President of the Republic of Lithuania Gitanas Nausėda, and in cooperation with the Ministry of Foreign Affairs, the national broadcaster LRT, the law firm Triniti Jurex, the Marius Jakulis Jason Foundation, Strategic Staffing Solutions, and the Lithuanian World Community.