GLL Addresses the President on Human Rights Issues in Lithuania 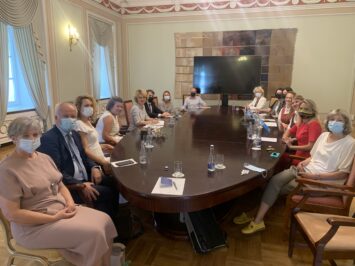 GLL, along with 14 clubs of Lithuanian professionals abroad, addressed President Gitanas Nausėda with regards to the worrisome human rights situation in Lithuania and its impact on the state‘s international image, economic competitiveness, emigration, and our ability to attract and retain global talents.
We believe that for many years the attention of the state’s leaders and institutions to the topic has been too passive, and efforts to create a public dialogue that promotes diversity in the public sphere have been insufficient. As a result, vulnerable groups in Lithuania – such as women, LGBTQ+, migrants, and many others – face unfounded stereotypes, discrimination, hostility and are not provided equal opportunities.
Legalizing civil partnerships between homosexual people is only one of the steps that need to be taken.
We call the highest state institutions to set more ambitious and measurable goals – for example, to make Lithuania one of the most human rights compliant states in the European Union by 2030.
We call on the President to take an active role and initiate the National Agreement on Human Rights, involving political parties, state institutions, municipalities, public organizations, and all those who care about the future of Lithuania and unify different opinions to a joint vision on human rights in Lithuania.

>>READ FULL ADDRESS TO THE PRESIDENT ON THE HUMAN RIGHTS ISSUE