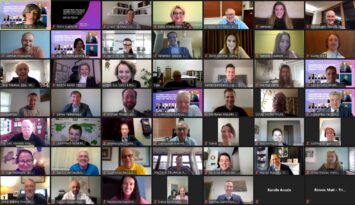 ithuanian Professionals on Both Sides of the Atlantic” of April 21 is a breakthrough in at least five ways.

First, it was organized by the exceptionally integral team of representatives from the Lithuanian Embassy, Consulate General and Honorary Consul, business associations, clubs of Lithuanian professionals from four cities, as well as GLL. The team got together as early as fall of 2019 with the intention to organize a large scale North American Lithuanian Business Forum beside the traditional Lithuanian Dance Festival / Šokių šventė in Philadelphia. The pandemic delayed the festivity till 2022 but the team decided to hold an introductory online forum driven by the belief in high time and endless technological possibilities for connection.

Second, the preparation showed the exceptional eagerness of Lithuanian institutions and businesses as well as organizations and Lithuanian professionals across the Atlantic for the initiation of proper dialogue and information exchange. The active engagement of panelists in preparation, as well as massive registration for the participation, proved the idea of an online forum timely and necessary.

Third, the forum bridged the gap of obvious lack of structured information on Lithuania as an investment destination, as a producer of high-quality goods and services, as well as on its well-trained modern state agencies ready to connect and establish international business relations. The panel discussions on doing business both directions featured top leaders of state agencies Invest Lithuania and Enterprise Lithuania as well as cross-Atlantic businesses and concentrated on hands-on issues, problems, and future challenges.

Fourth, the exceptional attendance of the networking session run in one-to-one break-out rooms and enabling the beginning of meaningful connections proved sincere (as opposed to formal and obligatory) interest in communication.

Fifth but not least, the forum has inspired the organizing team to continue the joint adventure and has laid strong grounds for the North American Lithuanian Business Forum

Watch the recording of the event here>>