European Chamber of Commerce in Hong Kong and Lithuanian Professionals in Asia got together to raise the awareness on the war in Ukraine by organizing online conference and initiate the discussion on its implications to geopolitical trends and business development in Asia.

The conference featured well-known academics and analysts who shared abundant data as well as forecasts and insights. 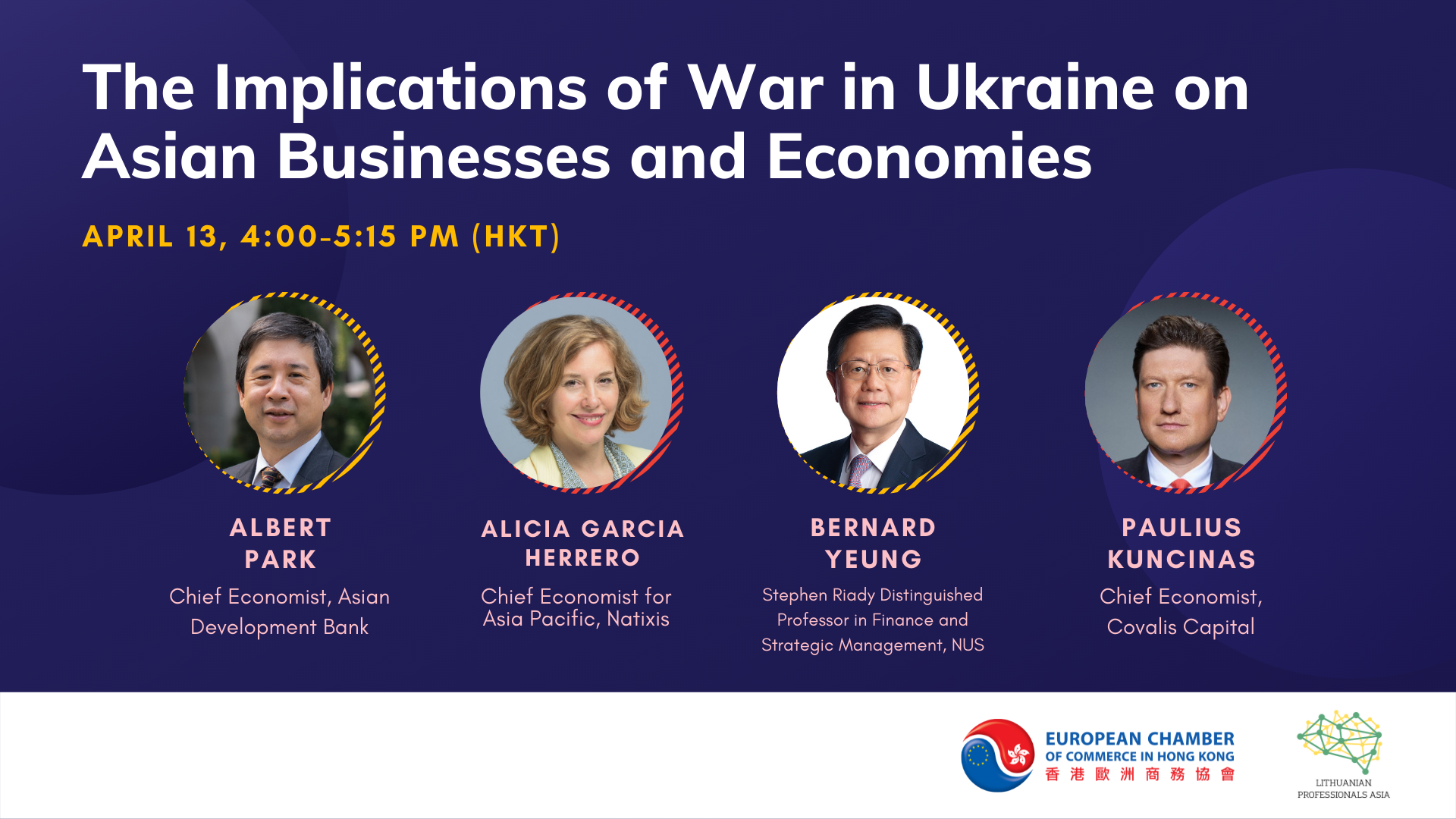 Albert Park is Chief Economist of the Asian Development Bank (ADB) and Director General of its Economic Research and Regional Cooperation Department, Chair Professor of Economics and Director of the Center for Economic Policy at HKUST with broad and profound advisory experience.

Alicia García Herrero is the Chief Economist for Asia Pacific at Natixis, Senior Fellow at the Brussels-based European think-tank BRUEGEL, a non-resident Senior Follow at the East Asian Institute (EAI) of the National University Singapore (NUS), Adjunct Professor at the Hong Kong University of Science and Technology. She is also Member of the Council of Advisors on Economic Affairs to the Spanish Government  and an advisor to the Hong Kong Monetary Authority’s research arm (HKIMR) among other advisory and teaching positions.

Bernard Yeung is Distinguished Professor in Finance and Strategic Management at the National University of Singapore Business School, the President of the Asian Bureau of Finance and Economic Research, Member on the Advisory Committee of the Institute of Economics, Academia Sinica, an Independent Non-Executive Director of the Bank of China (BOC) Aviation Limited since 2016 and the Advisory Board of Healthway Medical Corporation Ltd.

Paulius Kunčinas, Covalis’ is Chief Economist in charge of European and global macro coverage including green deal policy plans and the recovery fund, part of the European Commission’s Sustainable Finance working group as a delegated member.

The discussion was moderated by Alminas Žaldokas, Associate Professor of Finance at Hong Kong University of Science and Technology, Co-founder of LPA – Lithuanian Professionals in Asia. Some of the discussion takeaways included:

. The war is happening at the time when economies in Asia are still trying to recover from the pandemic. Region’s economies, including China, are in a bad cyclical moment and the governments face a balancing act of sustaining growth and improving livelihoods amid post-pandemic recovery.

. At the same time, the war’s effect on energy and food prices might be adding extra pressure that could turn into lasting damage, especially in low- to middle-income countries, where such rising inflation pressures might push more people into poverty. On the other hand, some energy exporters such as Australia, Malaysia, Indonesia might even turn out to be net beneficiaries.

. The Association of Southeast Asian Nations | ASEAN countries do not want to take a strong stance, especially since there is some skepticism that “microphones are controlled by the West”. While China appears to support Russia, the opinions even within China with regards to China-Russia cooperation are not uniform and rather diverse.

. Repeated major disruptions to global trade (US-China Trade War, Covid-19, Russia-Ukraine war) foster supply chain strategies that emphasize resilience and not just efficiency, and there are some signs of reinforced deglobalization. At the same time, the data does not yet show significant reshoring and globalization is likely to remain robust with Asian economies committed to regional and global integration.

. The world is about cooperation. How can Europe generate leadership by creating a more cooperative arrangement for other upcoming challenges? Can a more united Europe be a stronger player in Asia offering more mechanisms of cooperation?

. Emerging economies want to grow, improve livelihoods, and have the same living standards as the developed world. Asking them to introduce sanctions or even sanctioning them are sticks that might have limited effectiveness. Instead, Europe could consider offering carrots to Asia, especially where interests are aligned. For instance, Europe is getting serious about green energy transition, and such energy transition could also add long-term benefits for most Asian economies. Europe could offer more fiscal support and cooperation in fostering such green energy transition in Asia.